How do we communicate trust between the photographer and subject? How can the richness of cultural history be translated into the static photographic image? And can we ever be, just a passive observer?

As a volunteer at FOTODOK and a New Media and Digital Culture student, I have found the FOTODOK Book Club events an exciting and lively ground for questioning the medium of photography. I have always been fascinated with the differing analogue – and now digital – ways we interact with photographs. The choices artists make when printing their photos in book form can invite new ways of understanding photography itself. FOTODOK’s 13th Book Club on February 1 prompted many of these questions about the medium, particularly how it can write history, cultural memory, and become layered. To take a glimpse into the evening, I have taken a closer look at the diverse yet overlapping styles of Bieke Depoorter, Tobias Bijl, and Ad van Denderen, in how they each tried to approach the photobook. In exploring some of the themes raised during the evening, I hope that it may inspire you to continue discussing these questions with others. 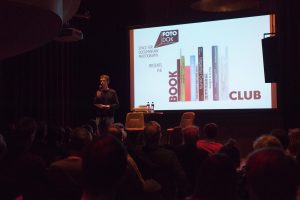 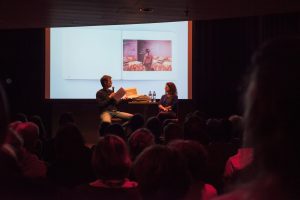 “Who can tell the story best? The people themselves.” — Bieke Depoorter

Belgian-born Bieke Depoorter’s ‘As It May Be’ is an intricate photobook that depicts her visits to Egypt after the revolution in 2011. Stepping away from public spaces and bustling towns, Depoorter focuses on the home; in particular, the intimacy of the Egyptian family. When asked why she chose Egypt as a location, Depoorter explains the secrecy of the private life. Egypt’s religion, culture, and the revolution made personal lives all the more private and strangers all the more distanced from one another. The home became an exclusive and familiar place, very rarely infiltrated by anybody unknown. Motivated by this impossibility, Depoorter was drawn to the idea of exploring the boundaries we create and how they can be crossed. Travelling with a translator, unable to speak their language, Depoorter was able to capture the miracle of human trust. Through the simple act of asking, she entered the homes of several families willing to be photographed.
Years after the photos were taken and compiled into a dummy book, Depoorter returned to Egypt in 2017 with this bound collection ofphotographs and two pens. Feeling that the photos were incomplete in their original form, she invited people to write on top of the images. The result is a series of intricate pieces that speak on two levels: that of the original image, and the collective thoughts and opinions of those who had written on them. These photographs become a platform for conversation, inviting positive and negative debate. For Depoorter, it was a “solution for my doubt”, the doubt many photographer’s face of dictating how their subjects are seen. By allowing actual written words to cover her photographs, ‘As It May Be’ allows us to ponder the value words still have within a visual culture.

“In the end, we will always find the truth.” –Tobias Bijl 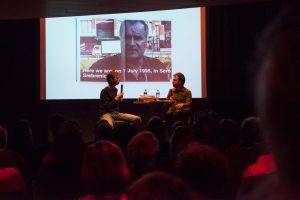 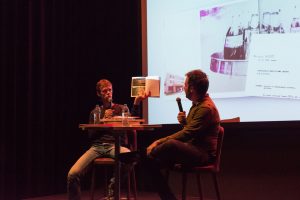 Sometimes it is that which is lost and goes missing which is the most intriguing. We can remember that something is gone but can easily forget what exactly has vanished. For Tobias Bijl, it was the famous mystery of a lost roll of film charting the evacuation of Bosnian Muslim civilians in the Srebrenica massacre that inspired the project, ‘Lost Takes.’ Haunted by fragmented memories of war coverage on television, Bijl engages with the way wars can scar places and personal memories alike. He is fascinated with sites where the effects of the Yugoslav war still remain. Bullet holes mix with graffiti as Bijl’s photos show the continual layering of human pain, experience, and recovery. These sites, or “guilty places” as he prefers to call them, become the backdrop of “Lost Takes”, where the photographs are interwoven with printed documents that build a shockingly-real fiction story. What results is a beautifully rich photobook with literal layers, papers, and small clippings mixing with one another. Even the front cover of the book is a photograph glued then hand-ripped off, creating hundreds of variants, each one leaving a different trace behind.
Each its own hand-folded and individual story, ‘Lost Takes’ is able to exercise human touch in the medium of photography which has often become distant and cold. The photograph, in capturing one thing, also fails to eternalise another moment. Aware of both the memory-making qualities of the camera and the inadequacy of photography in actually freezing time, Bijl’s collection reminds us of the truths and fictions we make about our own histories.

“It is not judging, but simply showing.” – Ad van Denderen 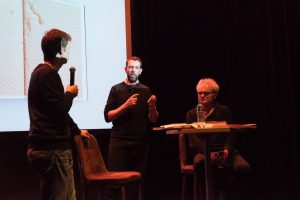 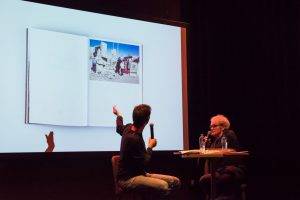 In Ad van Denderen’s ‘Stone’, the shape of conflict finds itself in a metaphor. A stone is a seemingly mundane object; unsuspecting, it exists on the ground and only becomes dangerous once wielded in a human hand. It is the hidden weaponry of the stone that becomes representative of war. Yet the stone is also a humble object, used to build walls, homes, and communities. These two sides of conflict are explored by van Denderen in showing a wealth of stories, both private and public. Tracing his visits to Israel from the 1960s to the 2000s, it is a photobook about how the nature of human relationships can be drastically changed by conflict.
The photographs range from black and white to colour where the story of the Israeli-Palestinian conflict is shown to outlast time and photographic style itself. Van Denderen felt uncomfortable with the rather emotionless nature of journalistic photography and was therefore impelled to produce a small, unpretentious book of quiet stories. He recognises the inability, and even the foolishness, of trying to depict the war as a whole. Instead, ‘Stone’ gives us a glimpse as if we were just passing observers, ready to make our own interpretations of the series of events. Photographs, although rarely solutions alone, can be entrances into them.

These three guests attempted to convey honesty in the photographic process, especially in how we see history and cultural identity. Although there will always be endless layers of undetectable histories, the camera can act as just one microphone, able to amplify even the smallest voice and the quietest story. How do you think the camera can help in our pursuit for historical honesty?

The next FOTODOK Book Club #14 will be held on April 5 at TivoliVrendenburg, so keep an eye out for ticket sales. You can also become a Book Club Subscriber for €30 which will give you a 10% discount on all the books and entrance into every Book Club event this year: including our event on 6 December, where we will welcome Martin Parr! Do you want to be assured of a seat during this special evening with Martin Parr and others, buy a Book Club Subscription!