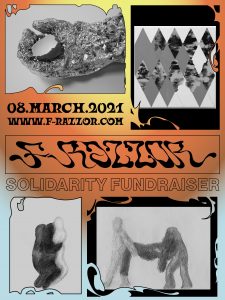 Abuse of power comes as no surprise. As some might have noticed the F-RAZZOR website has been down. The solidarity fundraiser is since early Wednesday morning under siege of a DDoS attack and a forced security shut-down was the only temporary solution.

This is a serious cyber attack by someone who is paid to silence us. Someone is violently targeting a community that is based on care. We want to let you know that we are taking this extremely serious and that the F-RAZZOR team will report this to the authorities. No data breach.

We will inform as soon as we can with solutions to get the campaign back to life. If you wish to reserve a work that was on your mind in the mean time, please contact info@f-razzor.com This attack is representative of the forces we are standing against, we will need your support more than ever.

FOTODOK would like to invite everyone to support the F-Razzor Solidarity Fundraiser—a fundraising campaign to raise awareness about current issues relating to sexism, inequities, and the abuse of power in the Dutch art field.

The fundraiser will financially support victims of sexual abuse with legal fees and psychological counselling expenses. From the 8th of March until the 15th of March, an online web-shop is launched featuring the works of artists who attended the Rijksakademie in the period of 2014-2017. All alumni are donating their works in support of the cause.

Among the 60 participating artists is Inge Meijer, contributing an image from the ongoing project A Garden Revisioned, presented at the latest FOTODOK exhibition Pass It On. Private Stories, Public Histories.