It’s by now a tested recipe and starts every year around November. I look back at the last edition, gather tips from colleagues for new photographers, check the existing teaching materials with the teachers involved from both schools and add if needed new ideas. A list with examples starts to take shape. The planning is one big puzzle that always needs to be solved. Next step is to contact and win over the photographers I’ve put on my list for the project, align dates and finally at the end of January: the kick-off of the Fotodok Students Award.

The Fotodok Students Award is a yearly contest we organize for first year students of Graphic Lyceum Utrecht (secondary vocational school) and third year students of X11 Media & Design (pre-vocational secondary school), in cooperation with the schools. Over 350 students work on a photo documentary for two months, under the supervision of professional photographers and subject teachers. The students visualize their perspective on the theme Family Stories. Stories large and small, on unexpected, beautiful, sometimes also distressing, moving and sweet events from everyday family life. The work of nominees and winners will be exhibited in public spaces in the city center of Utrecht.

I really look forward to the energizing kick-off, the big start of the project. The three participants have by now developed a routine in setting up this project, but it always gives us lots of energy. Why? Maybe because it’s always special to get an insight in the personal world of adolescents and youngsters. What personal stories are important in their lives? What is the meaning of family for these students? What are they daring to show? Much, we can say after five years experience, and many wonderful things.

It’s early Monday morning at the end of January and the classroom is filled up for the kick-off. ‘It’s not about the perfect photo but about the story you want to tell’ says Ringel Goslinga, this year one of the three photographers coaching the students. ‘I have a talk with my photos now” he continues while showing his work Family Tree, City People and Circling. He speaks about his own family in which his father, who is ill, has an important place. ‘In my opinion this conversation is as important as the final picture.” Romi Tweebeeke talks about her project Cis & Mien, elderly identical twins she followed for six months. These somewhat stiff ladies (‘I was afraid every time we met that they wouldn’t let me come back’) were the reason she came to focus on seniors in all the work she creates.

‘Try to find a subject close to you, to tell a story that you want to tell’ is Carla Kogelman’s advise to the students. The hall falls silent looking at her work Waldviertel while she speaks about her own youth. ‘My youth was unhappy, maybe that’s why my photos are the opposite: too happy, too beautiful.”

By their inspiring example, the three photographers Ringel, Romi and Carla set to work 350 students in making their own documentary during a two-day kick off. And after their coaching work, question each other with curiosity about their respective work in progress. Meanwhile, Carla Kogelman wins the Silver Camera 2017 in the category Sports, and captures a nomination for the World Press Photo 2018 with her long-term series Waldviertel. And we’re just three weeks on track!

Every year it is the openness of the photographers and their versatile work that inspires the students to set out and look for a family story. Of course, the students also get a lot of practical tips and answers to all their questions. Take care to get close to your subject, ask yourself questions, work only with daylight, stack images, don’t empty your memory card for once, restrict yourself in the amount of photo’s you take so you’ll look better – all personal advise that works for Ringel, Romi and Carla and they are happy to share with the students.

In the weeks that follow the students meet the three photographers during feedback rounds where they can discuss their ideas and/or concept, and during a one-on-one work meeting to discuss the feedback received. Feedback on your work from professionals, who wouldn’t want that? Meanwhile the subject teachers of both schools work hard during the photography lessons to make sure that all series are complete for the deadline end of March. 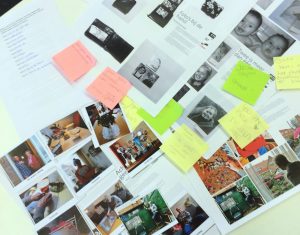 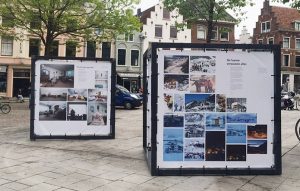 Photo left: series in development. Photo right: impression of the open-air exhibition of nominees and winners.

Grandfathers and grandmothers as a source of inspiration

The last two weeks I attended several feedback rounds and heard wonderful, often moving, stories. Lost loves, moving to a new house memories, cozy family life, living with foster parents, absence of family, traditional living on a farm, a serious hereditary illness in the family, and not least grandmothers and grandfathers who are a never ending source of inspiration.

‘But my family is really normal, nothing special’ said one of the students today, ‘it’s just very cozy and nice at home. That’s not interesting, is it?’ ‘So you’re all sitting on the couch at night, wearing your slippers?’ asked the teacher. Hopefully I’ll see the answer to that question in one of the 350 series, later on. After all, you can discover enough of the special in the ordinary; you just have to really look.

Meanwhile I’m counting down towards end of March: I’ll walk through the school and see the 350 documentaries in an impressive exposition in the hallways. Often I recognize ideas; stories really come to life and new stories stand out. All students and teachers vote for the public awards. The expert jury consists of the three photographers, last year’s winner and jury chairperson Femke Rotteveel, Fotodok’s director. They have the ‘heavy’ but festive task to choose a winner out of all these talented competitors. Up to now, they always succeeded with lots of coffee, much discussion, a good lunch and a sharp eye. I’m looking forward to it!