It’s a sunny Saturday in June, we’re on a crowded Domplein filled with people taking a break from their shopping spree, whilst others wonder around, map in hand, participating in a treasure hunt. Next to the Dom Church we find the ten participants of Lighthouse, FOTODOK’s talent development program for emerging artists. It is interesting to see how passers-by respond to this open-air presentation. Sometimes hesitant, but the treasure hunters, filled with curiosity, approach the makers with ease. The shopping public needs some encouragement, but once they move past their first doubt, they’re ready to immerse themselves in the imaginative worlds of the artists.

Zoë Zandwijken dives in immediately with a survey that poses the question ‘What language are you?’ This question is just as much an assumption, implying that language is something you don’t just speak, but is something that has an influence on your entire being. Zoë explains that she doesn’t speak her father’s language, Papiamento. Not mastering this language means that histories and stories remain out of reach, making it harder for her to understand her father — and by extension herself. She mostly thinks and learns in English, a language so omnipresent in the Dutch culture, it will certainly give shape to the future. Slowly but surely the necessity to master multiple languages disappears, making our past unintelligible. This dilemma lies at the core of Zoë’s research. She carries this out on the square, naturally, by making conversation.

The same attention to the undetectable, but essential is present in Ana Nuñez Rodriguez’s work: to describe cultures, she selected one of the most basic food items: the potato. Whilst it remains a frequently used ingredient world wide, this tuber doesn’t exactly have a culinary status. Ana’s video work supports that claim, as she invites people to share their relationship with this root vegetable. An economist explains that the potato disappears from the household, as soon as people’s budgets increase. One of the scenes following this claim; the peeling of a potato until there’s nothing left. The message is clear: there is no such thing as the essence of a potato, the way it’s prepared determines everything, making the crop a fitting product to illustrate cultural history.

With history for sale on a cheerful flag, Walter Costa transforms himself into a travelling salesman making his way around the square. His message is serious. Whilst governments close their eyes or choose to remain absent, archeological treasures are stolen, finding their way to collectors via smugglers. The trade happens in private Facebook groups. He points out that the collectors aren’t aware of the fact that their demand leaves little to nothing for local museums and archeologists. At the same time, we might say the trade is a blessing in disguise, as the Facebook groups leave ample traces in the form of pictures of the objects up for sale. Based on these images, Walter makes 3D models; beautiful copies you can, in fact, purchase. Whilst he uses the images as forensic evidence, he doesn’t want to point fingers at a guilty party. The interesting part of his work is how he stays within this moral dimension between saving and possessing. 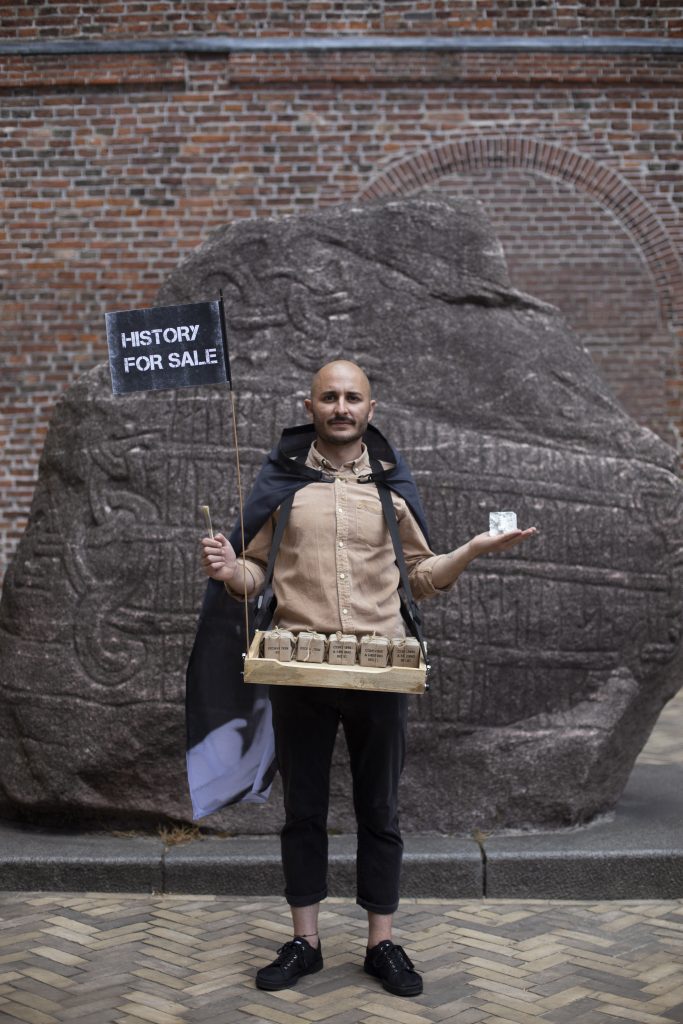 A little further along we find Daan Russcher, dressed in a suit amidst a range of breezy summer outfits on the square. A refined image, until you get closer and see how his shirt is dusty and covered in sand. The result of a long journey from the frayed edges of the city to Domplein at the heart of Utrecht, he explains. He pushes a hand truck around with a photograph he made there. At first the piece seems to be an abstract study into colour, but a closer look reveals it is in fact peeled off paint on a piece of concrete. The print is moveable, which is visually emphasised through a digital edit, removing the surroundings of the concrete block. In reality, Daan sees a similar movement; in the context of unregulated wilderness, things are made which feed the civilised center. 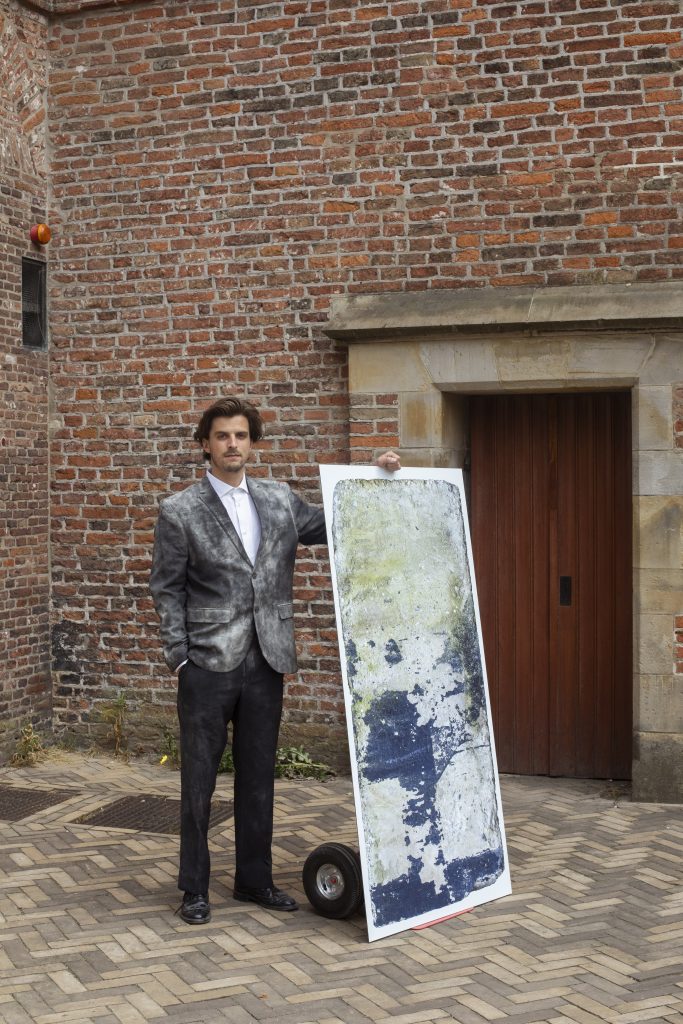 Many of the participants engage in questions of family history, and ask how those histories find their way into the present, and how they (indirectly) shape them today. As a result of this last question, the work is often personal, resulting in conversations with and about the maker.

Alexis Molina, for example, presents a historical folktale set in Curaçao, his place of birth. He photographed the locations of key scenes in Buchi Fil’s life. Fil was a strong and charismatic man. Other enslaved peoples relied on his support in a rebellion against their masters and trusted this natural leader in their strive towards freedom. But Fil was not looking to cause any disruption. Regardless, his captors saw him as a threat, engaging in failed attempts to reduce his strength through heavy physical labour and ruthless punishment. The story ends tragically, when Fil’s wife is taken away from him. Pointing at the cliffs on the image, Alexis explains that Fil threw himself off them. The moral of this story, he says, is that we should never wait for a situation to become untenable, instead we must use all our power to stand up for ourselves immediately, before it’s too late. 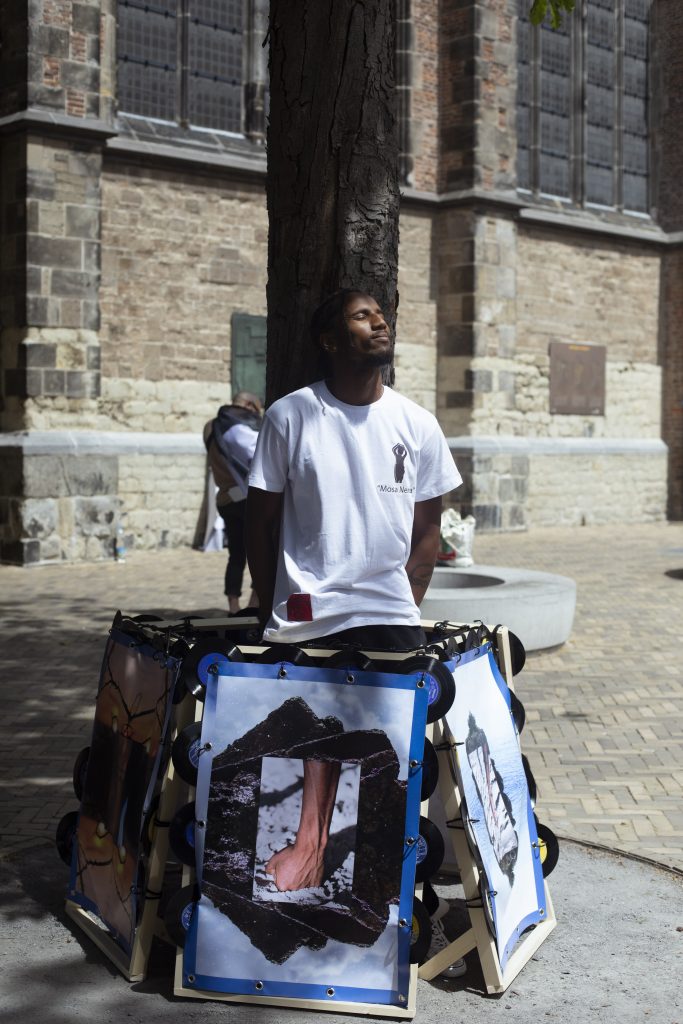 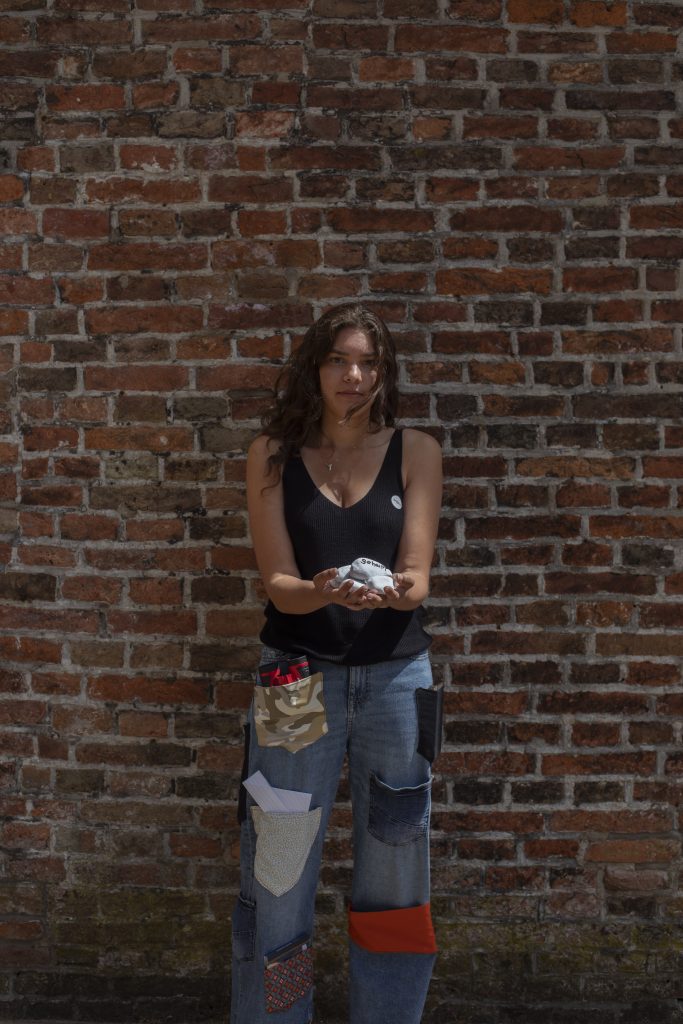 Naomi Kok equally questions herself by researching her family history. She is the offspring of Herbertus Bikker, a convicted war criminal. Is maliciousness hereditary? Naomi tries to put things into perspective; it may have been a very naive and predictable choice that lead her great-grandfather to become a camp warden. She only learned the details of this history once she started reading his hearing statements. She explains how her grandmother suffered under the stigma of this family name. In her pockets she carries objects representing this past. Still, whilst being the youngest generation who carries this past, it is up to her to find a way of coping with it.

Ebru Aydin fights against the prejudiced understanding that Muslim women wear their headscarf involuntarily. To disprove this message she made the photo-series ‘Hijabverhalen.’ As a sociologist, she is trained to analyse behaviour and culture. This makes her approach in this project stand out, instead of focusing on ungraspable things related to the ideology or history of wearing a hijab, she makes it tangible by speaking through the different fabrics. On a clothing rack you find a selection of those fabrics in a range of colours and patterns. Passers-by are invited to choose one and wear it. I saw people pose as Ebru took their polaroid picture. However, the most important image appeared before, when Ebru held up a mirror and people recognised themselves as a person wearing a hijab. 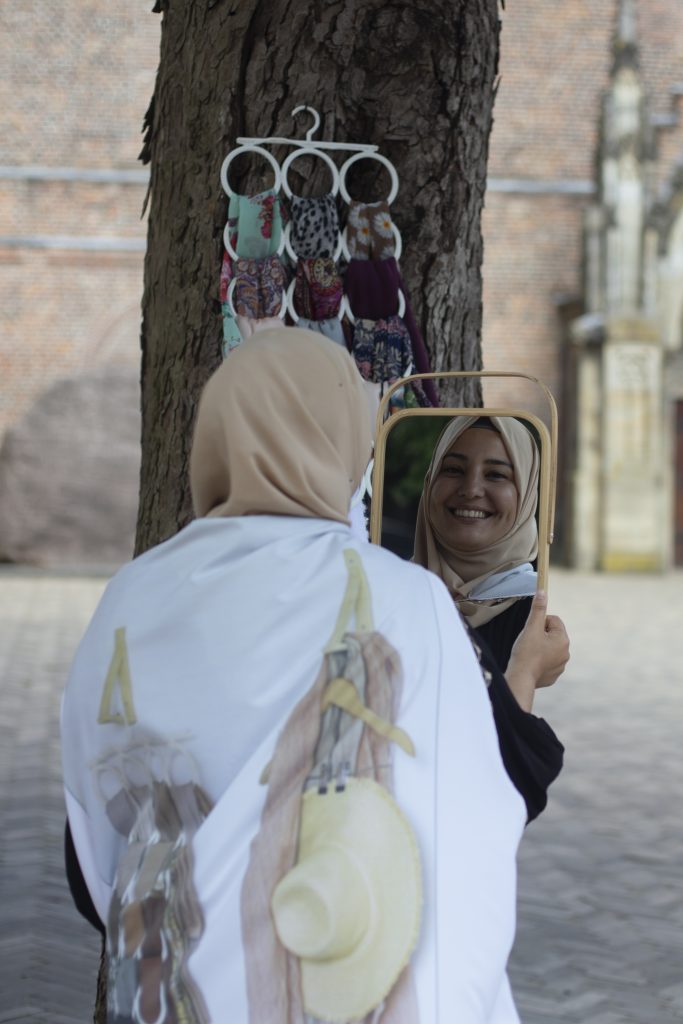 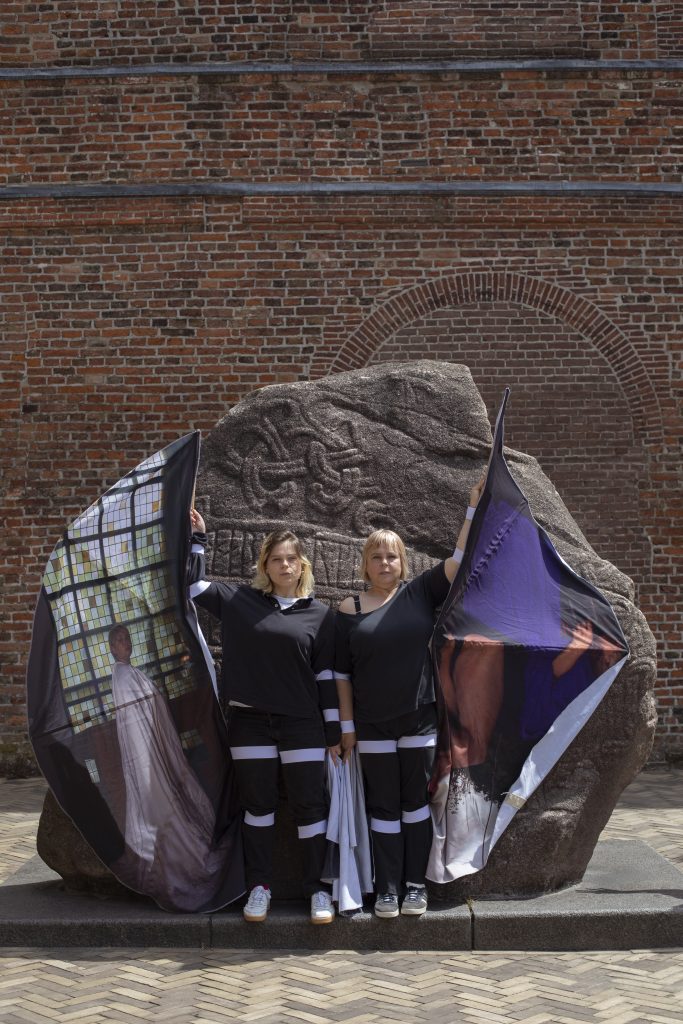 Becoming Movable Statues is the title of this Lighthouse edition. The most mobile of the bunch has to be Pippilotta Yerna, who flutters around the square. Literally: on her back and arms she carries sticks and fabric, making wings reminiscent of those of a bat. When she spreads them, the left wing shows an image of her mother in a white cape, looking straight into the eyes of the spectators on the square. ‘Everybody has a mother, but I think we don’t appreciate her enough.’ She states. Yerna also reflects on her heritage: contrary to her mother, she calls herself a feminist. Yerna disagrees with her mother’s position, as she feels that the hard work of raising a child makes her mother a feminist at heart. It seems that this care doesn’t stop when the children grow up: because today her mother flutters around the square in the same wings, participating in Yerna’s performance.

It is interesting to note that most of the photographers chose a medium they don’t usually work in. Michelle Piergoelam predominantly made visual work in a project entitled The Untangled Tales, but today she shows something that could be understood as a performance. Michelle takes passers-by to Surinam, she explains. The performative twist in her work needs to be taken literal: she turns and reveals the box on her back which holds a miniature scene of a river in the jungle. From a speaker we hear songs of enslaved peoples. She tells us how she strives to document and share this culture as a monument for their unbridled resilience. 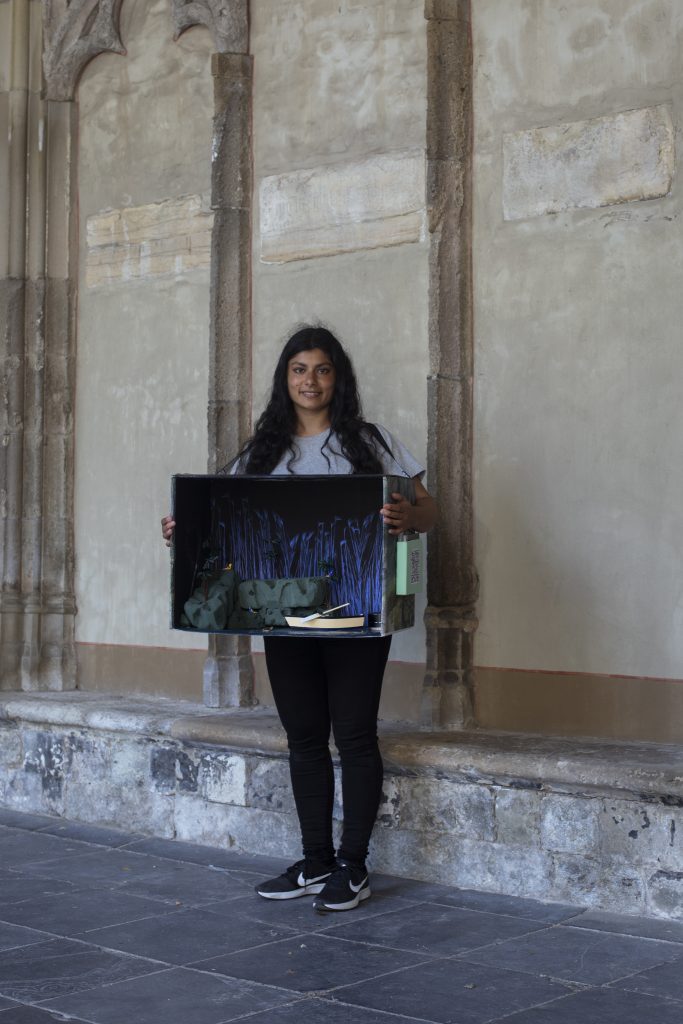 Throughout the afternoon I catch a smiling face and yellow cleaning gloves, scrubbing the furniture on the streets with a piece of cloth. ‘I want to keep busy when I’m not speaking about my work’ Monika Balu explains. She starts to talk, and takes out some photographs from her inner pockets, on them we see a mask used to avoid contagion during the Spanish flue. Monika doesn’t want to break down the sensations of this experience, she shares, in relation to the Facebeak she made. This see-through beak becomes foggy with the wearers breath, making it impossible for hard-of-hearing people, such as herself, to read the wearers lips. Her work speaks to the senses. Although that really just explains the subject at hand. It is the lively smile, always engaged with its surroundings that really shares the message, theme and histories of the practices presented to a surprised and excited audience on a Domplein, the tools accompanying them, are just that; tools.