The New Ones – exhibition opening review

– By Christen Faver – intern at FOTODOK

On Wednesday the 24th of July the Hogeschool voor de Kunsten Utrecht photography graduate students had the opening for the exhibition The New Ones. The atmosphere was a relaxed one as the presence of summer made itself known and the students could let out a sigh of relief, as they come to the end of their busy academic year. It is interesting to see the future of photography through the eyes of this collective. There is a diversity of mediums being showcased, as video installations, spatial objects and photography come together in one space.

What is perhaps the most interesting about this exhibition is that it is less static and rigid as most institutional exhibition spaces, because some of the rooms are subject to change during the exhibition process. This is because developments will be made in order to illustrate the process of the artist and the steps they take during their creative endeavours. Therefore, it is encouraged for viewers to come back at different points of the exhibition. 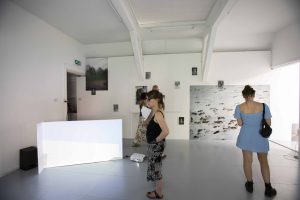 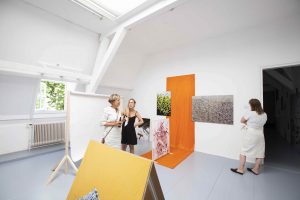 Exhibition opening The New Ones – photographs by Martha Stroo

Two examples of projects that show the diversity of the photographic medium include the works of Nienke Meijeringh and Renée Stravers. Nienke’s work, “Only when these rules are broken (do we realize they exist)” (2018) is interesting as it is interactive with the viewer. Drawing on my own interpretation, this is an interesting concept that is reminiscent of Roland Barthe’s “Death of the Author” – as artists question, not only their role in the creative process but the way in which the visitor’s consumption of the art piece plays a role in this process as well. This is seen in the way that Nienke explores social interaction and spatial awareness, as, without the visitor, her questioning of social interaction would not be made explicit. 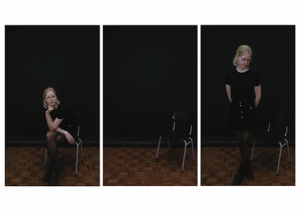 Nienke Meijeringh, Only when these rules are broken (do we realize they exist), 2018

On the other hand, Renée’s work, “Wandering Notional Spaces” (2019) is interesting because she has managed to physically expand the 2D out into the real world by connecting black lines with the projected image, resulting in a 3D art piece that commands the room. The reason for this being Renée demonstrating how she sees spaces, in terms of geometric forms and lines. Her work plays with the way that space is used and perceived, as conceptual frameworks that mediate our usual view of the world are called into question. The work is attention-grabbing, as suspended black lines draw the viewer’s focus into and around the artwork.

Hopefully, these creative pieces inspire you to take a short break and come by FOTODOK to delve into this wonderful exhibition. Make sure you attend before the closing evening on the 25tht of August. Entrance is €2 and visiting hours are from 12:00-17:00 from Wednesdays to Sundays.

*Meijeringh, N. (2018). Only when these rules are broken (do we realize they exist). [Video Installation]