The value of wonder – by Janneke Aronson

“Ha, they’re wearing shark masks!” A small group of children looks fascinated at a photograph of two little boys at the beach wearing toy masks. They start associating freely. Maybe the air is poisonous and they can’t live without masks. Or they belong to a secret gang. The wildest ideas spring to life and everyone’s phantasy is stimulated. The – already – third edition of Fotokids Week is in full swing and today’s theme is documentary photography. A difficult subject for children? Not at all! To see all kinds of stories around you or think them up is very close to their daily world, and today we link these stories to actually capturing them.

Together with a group of attentive children we look at the photo series Coney Island by Peter Granser and compare it to the series with the same name by Olaf Hartong. Though both series are photographed at the same location they differ like night and day. Hartong shows a sunny and happy place while Granser tells a far less rosy story. How can you see the difference? ‘There are no people in it!’ says Kuba, eight years, enthusiastically. ‘And it’s made in gray weather, miss.’

It’s great fun as always. To talk with children about photography is both surprising and refreshing and this edition’s Fotokids Week is no exception. There are four days of workshops to choose from, three of them for younger children. On request of many we started the week with a – sold out – workshop for teenagers aged 12-16 years. It’s a lovely warming up with a group of ten motivated youngsters eager to experiment with photography.

The workshop starts with an introduction on how to make a portrait, followed by ‘how would YOU want to be photographed’? Some are absolutely convinced that you shouldn’t laugh or smile in a ‘real’ portrait. As a reference they look at the work of classical masters of the photo portrait such as Richard Avedon and Jan Banning. Other kids are taken by examples from works like Where Children Sleep and What Refugees Carry With Them from James Mollison, Here they see how important personal objects can be in a portrait. They were asked to bring an object with a special meaning or memory. 14 year old Arend for instance wants his portrait to be made with his Rubik’s Cube in it and he came up with the idea that it should be a funny portrait.

The work of Jan Hoek and Jaap Scheeren is also very inspirational. The funny, playful and especially the colorful portraits are very much in demand. As Hannah (almost 12 years) demonstrates: she puts on bright yellow gloves and looks away from the camera with a lot of feeling for drama. Merel (14) instructs in full concentration. ‘Yes, that’s it. Don’t move!’ Looking together at the result they approve in unison: ‘Artful!’ 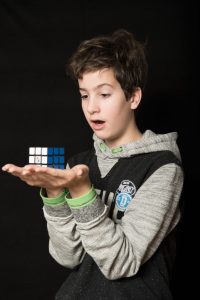 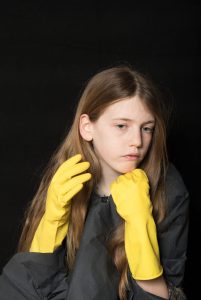 Some results of the portrait workshop

The second part of the afternoon we go on making artful pictures, but now outside. The children are going to make their own mini photo series, in record time. How do you do that, tell a story with photos and how can you make them fit together into one story? In the first place by looking around you and observing; the camera will come later. How to tackle this, well, everyone has his or her ideas about that is what we see during the practice session in the courtyard.

‘You should think about perspective. And depth.’ Melle (13) is a professional already on the technique. He can’t stop talking about all the possible camera settings but most of all he sees a story everywhere, worthy to be pictured. People are boring so with the work of Bernd and Hilla Becher at the back of his mind he decides to picture all the doors of Dom Square in exactly the same way. It is great to see how he makes the link that when you photograph a subject that’s not so interesting as such, tells a story when you make a series of it. 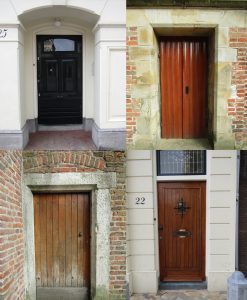 Merel feels that people are the most interesting subjects to photograph and she makes duo portraits of people and their special objects. Arend pictures all the flags in Dom Square and another group throws itself into picturing as many structures as they can find – from stone to bark.

We also take the younger children out to make a photo story. It is extraordinary to see how children can go through a strong development in just three hours. Shy Nouhaila (9) is reserved at the beginning, but later on she doesn’t hesitate to photograph two foreign tourists. Can she by any chance give instructions in English? No problem! 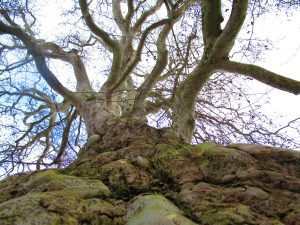 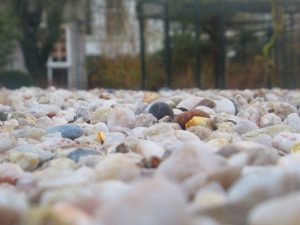 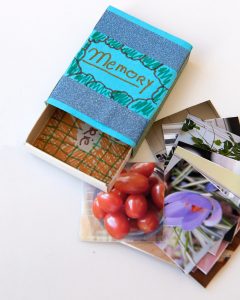 Playing with perspective & self invented and photographed Photo-memory game

The value of image and wonder

We at FOTODOK believe in the power of imagination. That starts with children: For them seeing and making up stories is still very close to the surface. This generation of children is the first to grow up with the matter-of-fact presence of SnapChat, Instagram and other social media based on the visual. What is the value of the image in all this overpowering photo abundance? And how can we teach children to find their way in this image maelstrom, to understand? The workshops we give are above all to bring children in a fun way into contact with the value of the image. And in addition, the value of concentration and fun involved in this process. Just as children are learning how to read at school, they also need to learn how to read images. This visual literacy, as we call it, is interconnected in everything we develop in the educational field. Never preachy, wonderment comes always first. A sense of wonderment is the key to insight and a better understanding of oneself and each other. The world could certainly use a bit more of that.

How are we doing our job? Children are the most honest critics you can find, so let’s end with a pupil that answered her mother what she thought of the lesson, did she like it? ‘I didn’t like it. I loved it!’

Curious about our complete workshop selection? Click here (in Dutch only)