On Thursday the 5th of April, FOTODOK’s 14th edition of the Book Club took place at Tivoli Vredenburg in Utrecht. Guests this evening were Robin de Puy, Christian van der Kooy and Andrew Phelps. In addition to talking about their books, photographer and Book Club host Rob Hornstra introduced the audience to an item about the War Primer photobook series. Iris Du, a student in New Media & Digital Culture and volunteer at FOTODOK, was present and wrote a blog evaluating the fascinating story of the War Primer series.

When we see reprintings and republishings of a photobook, it is easy to assume that they are all just copies of the same thing. As pages go through printer, is this process not just a simple increase in volume? The content and meaning surely stays the same, right? Not necessarily.

Introducing: the curious and colourful case of War Primer 2. An adaptation (or appropriation depending on how you see it), this photobook’s rich and complex history is wrapped up almost entirely in how it was made. Introduced by Rob Hornstra during our latest FOTODOK Bookclub event, we now revisit the story of the War Primer series as a display of the intricacies and ironies that can surround art’s production process. 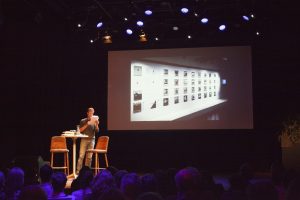 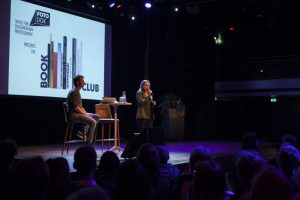 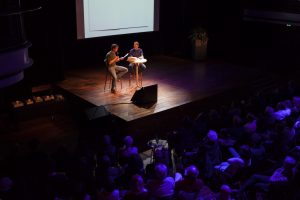 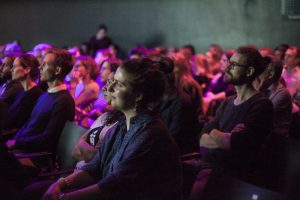 During World War Two, famous German playwright and political activist Bertolt Brecht created Kriegsfibel (translated: War Primer), a bold, visual commentary on the war’s propaganda under modern capitalism. Brecht’s photobook was a compilation of political collages made of photographs, clippings, and cuttings from various newspapers and popular magazines. Alongside these, Brecht contrasted the images with striking – and often conflicting – verses of found poetry. Using mass-media as a source, Brecht’s photobook violently critiqued the images of war that were presented to the public. In essence, Kriegsfibel was an emotive and passionate plea against the capitalist order.

Almost half a century later in 1998, Adam Broomberg and Oliver Chanarin published War Primer 2, an unofficial English-language ‘sequel’ to Brecht’s Kriegsfibel. Inspired by the desire to update Brecht’s work into a contemporary context, the creators physically stuck and overlaid internet images atop Brecht’s original photo clippings. This process resulted in a collaging on top of Brecht’s existing Kriegsfibel photomontages whilst the text stayed the same. Lastly, with some extra added red screen-printed text, War Primer 2 was born. At face value, this new version appeared to be similar in style and intention to the original, criticising mass media representations of the ‘War on Terror’ instead.

“We’ve now lived through 10 years of war [in Afghanistan] but, actually, we’ve a very censored view of it. We wanted to make a work that engaged with this problem, asking how images become a currency distributed by the media and how that currency relates back to the original moment?” – Broomberg & Chanarin, 2013 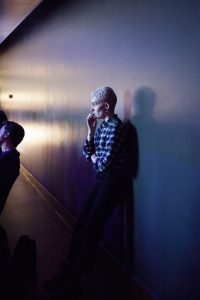 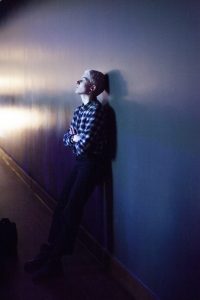 War Primer 2’s production story, however, differed. Whereas Kriegsfibel was mass-produced and affordable to obtain, Broomberg and Chanarin only produced one hundred copies, making War Primer 2 an exclusive, limited-edition series. All made by hand, War Primer 2 sold for approximately ten times the market value of Kriegsfibel. Now its rarity only continues to rise as it becomes a valued collector’s item, selling for over one hundred times the price of Brecht’s version. Eventually, War Primer 2 was in such demand that it was republished in paperback to increase its accessibility, though this time only available as a mass-produced facsimile of the original handmade War Primer 2.
British photographer Lewis Bush noticed an odd disjunction between Brecht’s original and the War Primer 2 adaptation. He criticises War Primer 2 for being completely against the intention of Brecht’s original work, not so much in content, but in production style. With the sale prices of War Primer 2 climbing to unbelievable heights, the book became an ironically commodified object. Additionally, Broomberg and Chanarin reportedly obtained the base-books free of charge from the defunct publishers Libris and had the help of supposedly unwaged interns in handmaking the one hundred copies. Bush notes:

“One has to wonder how Broomberg and Chanarin can reconcile Brecht’s politics with [the book] winning a prize sponsored by Deutsche Börse Bank, a financial sector company which so represents the type of capitalism Brecht despised and routinely denounced.”

In a bid to metaphorically “undo” the contradictory capitalism attached to War Primer 2, Bush appropriated the appropriation, producing War Primer 3. In this version, Bush defiantly reworks War Primer 2 back around its ‘original’ author by restructuring it through Brecht’s poem, A Worker Reads History. Significantly, this poem highlights the role of invisible labourers, who are too-often forgotten and given no credit in the making of masterpieces. This version was then distributed through a short print run and made shareable via a free-to-download PDF, widening its accessibility through anti-capitalist means. Bush aims to reveal – in a similar way Brecht sought to uncover the hidden messages within images of conflict – the covert hypocrisies War Primer 2’s production created. 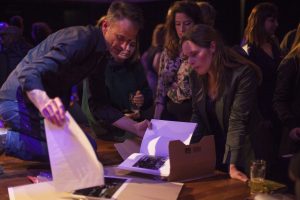 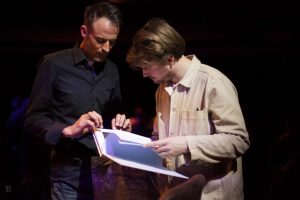 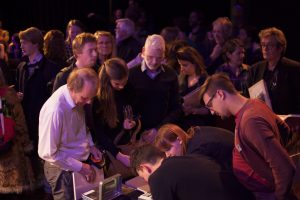 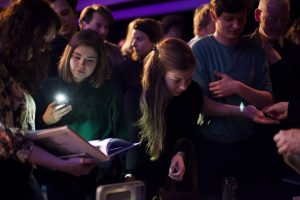 Whether or not you believe War Primer 2 is hypocritical, the story of the War Primer trilogy reveals the important role production and distribution can play in the consumption of a photobook. With few differences between the actual style and contents of each War Primer, this series allows us to see the layered meanings that can be created simply when art is made. Production alone can lead to an artwork’s hypocrisy, while adaptation, appropriation, and remakes can upturn the role of an artist’s intent.

Although largely transparent, let’s remember that publishing is rarely just a practical process. Photobook production is its own politics.

All versions of War Primer are available to purchase. Collect them all to experience the full story.

The next FOTODOK Book Club will take place on the 4th of October, where, among others, photographer Lewis Bush will be a guest.