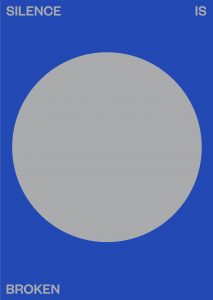 On the occasion of International Women’s Day, and in support of female and non-binary cultural workers, FOTODOK presents the manifesto Silence is Broken by the artist and publisher Delphine Bedel. The text bleeds. It shakes you up. It breaks the glass wall of silence surrounding the subjects of rape and sexual harassment, and especially in the field of arts. Bedel’s words alarm but they also give hope. The manifesto was shared a thousand times, and was first performed as a spoken column on the stage of TivoliVredenburg, Utrecht on 3 December 2020, at the most recent edition of FOTODOK BOOK CLUB.

“I always thought of publishing as a space of emancipation, but the history of the book contradicts this. Since the invention of the Gutenberg press in 1450, it was a space of exclusion. To take one example in France: the law forbade women to be printers, publishers, or typesetters until 1881—with few exceptions. Women had no political voice or representation; the law on freedom of press changed some of that (by women I mean a political class, according to the philosopher Paul B. Preciado). To publish means to have a public voice. Therefore, a feminist publisher, like myself, on this theatre stage is a recent history. Too many still have no access to education, representation, or freedom of press.

This archive and legacy of misogyny I just described is reflected in photography or photobooks too: in front of or behind the lens, in pages of books and magazines, in skate parks or art schools, forms of sexism, gender-based violence, and racial discrimination are systemic—here too, within Dutch art institutions or photo festivals.

There are countless modes of silencing women at work. According to the UN, one in three women will experience sexual violence in her life. In the Netherlands, a woman dies every ten days from domestic violence. Speak up and you’ll get bullied. There is an urgency to think collectively and implement care, accountability, and reparative justice. Rape culture is here, it’s pervasive, and it’s predictable. Why predictable? Because it is a pervasive culture that feeds on silence, yet many art institutions, art schools and museums didn’t implement efficient reporting structures to end it. We need intersectional research and yearly monitoring of gender-based violence in the arts to provide us with an overview of the scale of these issues. Taking into account the experiences of the survivors is essential. We need radical change, radical care. We are legion. Our words are becoming healing, solidarities, and communities.

SILENCE IS BROKEN – A MANIFESTO

Legion who have experienced, word for word, dramatic situations close to those described in the investigation published in the Dutch newspaper NRC on 30 October 2020.*

You knew, you knew but you stayed quiet.
Whatever his name was, you knew.
Let this be an earthquake.

What does it mean to report sexist or sexual harassment, sexual assault, and domestic violence to the institutions that have failed us in the first place? What does it mean to report to the police, with the current Dutch legislation on rape, with rape kits or shelters barely available? What does it mean to get an abortion because we were raped, without a buddy to protect us from the harassment of religious zealots while walking to the hospital door? Even in this violence, there are privileges. Did it crush our soul to realise the police won’t investigate, or was it when the lawyer stated there’s no chance to win in court due to a lack of material evidence? To be resigned to the fact that the law is not justice and justice will never be done?

And anyway, where do we find that kind of money to go to court.

And anyway, there is no justice possible for rape.

And anyway, how do we acknowledge that the horror he put us through is, in fact, a crime? That he will walk free?

Can you then fathom the violence when you see art institutions and academies repeatedly opening their doors, their exhibitions, their collections, their pages, their classrooms, their awards, their juries, relentlessly celebrating his work, while silencing the victims’ voices repeatedly? You knew, you knew but you stayed quiet.

You kept liking his posts, showing, buying, and publishing his work, clapping hands in the media to this “enfant terrible,” this “provocateur,” this “difficult but talented genius.” You refused to engage when we asked for anonymity, our only protection left. Accountability means to commit, to listen, to engage. You pressure us to say his name, but it’s encrypted. The code to make it public is your provision for legal fees, with the money you made on his career, while we were rebuilding ourselves. Reparative justice (google it), see we’re progressing. So dear institutions, in your public statement, don’t pretend you didn’t know, because that’s silencing us one more time. Don’t call it “crossing borders” instead of rape, because that is negating what we lived through.

We died under the blows. We didn’t die.

How did we live another day?

How did we live another day with haunting memories and all the sequels? Time and time again, digging into our multiple traumas with the hope that, for once, speaking up will have an impact? Your violence infiltrated our art and we let it happened, until we didn’t.

And while you were holding on to your institutions and your testicles, while your narratives collapsed, we taught ourselves to speak, to sing, and dance. Your blows, your fires, and bullets are real, and so is our joy, softness, and love. We weaponised our rage in our art to set ourselves free. Our words became healing, solidarities, and communities. Our traumas are nobody’s medals.

Silence is broken. We are Legion.”

engagementarts.be is an artist-led movement tackling sexual harassment, sexism and abuse of power in the Belgian arts field.